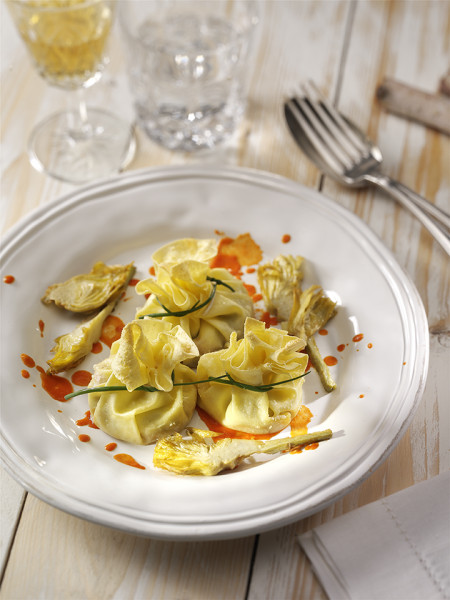 With the help of an immersion mixer, blend the Pomodorina and strain it. Meanwhile, roll out the egg pasta  to obtain a very thin layer and cut twelve 13 cm squares.Blanch the pasta squares in boiling salted water for about two minutes, then cool them in iced water and dry them carefully on a cloth. Spread a little stracciatella, the artichoke hearts sauce and the slices of pancetta in the center of six squares of pasta. Cover the filling with the remaining sheets arranging them sideways then collect the edges of the dough as a bundle and transfer into the previously buttered single-portion cups. Tighten  them with chives  Complete with a sprinkling of grated Parmesan, then bake them in the oven at 190 ° C for ten minutes. At this point drain the roman artichokes from the excess oil and dry them on paper, then slice them. Fry the artichokes until they are golden and dry them on absorbent paper. On a plate spread the tomato coulis with the baskets of pasta in the center and some fried artichokes. 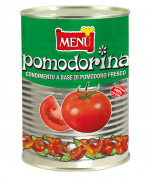